You may have heard about Delft Blue. The pottery with typical blue handmade decorations on it. Maybe you or your (grand)parents have Delft blue pottery as tableware. Delft has been internationally known for its Delft Blue pottery since the 17th century. Visiting an ancient factory is therefore indispensable during a visit to Delft and its surroundings. The Delftse Pauw and Royal Delft are two of the few original pottery factories that are still open. You can visit these factories! The factories are within walking distance of the center and are easily accessible from the Zuidpoort garage (Royal Delft, 10 minutes) and the Prinsenhofgarage (Delftse Pauw, 18 minutes). Free parking is available in the immediate vicinity of the factories. 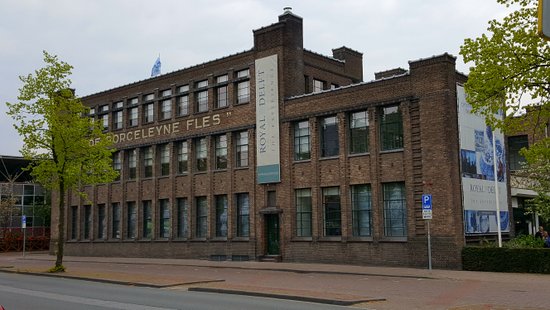 Royal Delft is the last remaining pottery factory from the 17th century and can now be visited as a museum. The Royal Delft Experience let you discover how the original Delft Blue is being produced in the traditional way. It shows you how painters nowadays still paint the Delft Blue by hand. When you visit the museum the audio tour, included in the entrance, leads you trough Royal Delft and is available in many languages. It is also possible to be shown around by a guide. For more information, visit the Royal Delft website www.royaldelft.com. On the website you can find the current opening times and prices for admission as well.
Royal Delft is within walking distance of the Zuidpoort garage (10 minutes) and is also accessible by the city shuttle. Parking is also possible at the front and back of the factory.

History – Porceleyne Fles
In 1653, ‘De Porceleyne Fles’ (the original name of Royal Delft) was founded by David Anthonisz. v.d. Pieth at the Oosteinde in Delft. After a few years the factory came into the hands of businessman Wouter van Eenhoorn. He had financial interests in several Delft earthenware factories including ‘De Paeuw’ (the Delftse Pauw). It is suspected that ‘De Porceleyne Fles’ flourished enormously during this period. In the following years, the factory was owned by several owners.

In the 18th century, the Delft industry was faced with various difficulties, including the discovery of china clay and the spread of porcelain in Europe. As a result, the craft strongly declined in the 19th century. ‘De Porceleyne Fles’ was bought in 1876 by an engineer, Joost Thooft, who adapted the production method and repaired the factory. To this day, Royal Delft pottery is produced in the factory. The Delft Blue is baked, glazed and baked once more, after which the final product ends up in the showroom after an inspection.

In this factory Delft blue is still made like they used to do it back in the days. Hand made. In the factory also has a store and showroom, a workshop area and besides that, the factory is open on daily base for guided tours. So you can see how Delft blue (multiple colours and only blue) has been made for multiple centuries. You see how they paint the decorations by hand. De tour is given by an expert who can tell you anything about the process of Delft blue. De Delftse Pauw is a pottery factory from the 17th century. It is still in use. Besides that they still make pottery here, nowadays there are also workshops and guided tours. Great news! A visit to the Delftse Peacock (Delftse Pauw) is free. Every ten minutes there starts a tour. Before you visit, please check the website for the most actual opening hours. To take a look in the factory is a unique experience which can not be missed when you visit Delft and surroundings. Do you come by car? Then you can park at the factory. There is free parking space here. You can also walk from the centre of Delft. If you want to do that, you can park your car at the Prinsenhofgarage.

History
When the factory was established in 1650, Majolica items were made. Majolica factories faked blue-white porcelain from China. During the 17th century this was immensely popular and by the civil war in China the export to foreign countries was less. The Spanish and Italians started with the Majolica factories. Also in Holland, on the place of the Delftse Peacock (Delftse Pauw), emerged a factory like this. After a while this Majolica factory started to create Delft Blue. In the 17th century were eventually about 32 factories who made Delfts Blue in Delft. Nowadays there are only a few, original factories who make Delft Blue. De Delftse Pauw is one of them.